Muammar the Mutable:
Contradicting Views regarding the life of Muammar Gaddafi
Part I
by
Brad Kronen 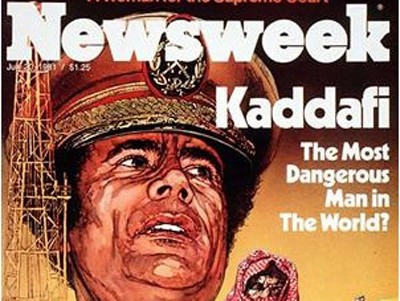 The American media crystallized the vilified persona of Muammar Gaddafi during the Reagan years, as in this cover of Newsweek from July of 1981. (businessinsider.com)

The revered performance artist and culture maven, Gemini Laurie Anderson, has a public service announcement video which I had the pleasure to hear her relay to a live audience some 20 years ago at The Brooklyn Academy of Music. The title, but even more so, the content of this particular PSA was provocative to say the least – “Women and Money”. With her usual mesmerizing, story book cadence, Laurie told her story of a particular parade she partook in during the 1980’s, a heavily media covered demonstration of protest that was held at Manhattan’s Playboy Club.

Ms. Anderson served as the protest movement’s spokesperson, commenting to the large gathering of  press that her group had convened at The Playboy Club that particular day to protest the economic exploitation of women. That, and they were calling for a ban of various animal words which had come to symbolize women in general, such as “bunny, chick, fox, and pussy cat”. Laurie went so far as to design protest pamphlets which boldly illustrated these baby animals, emphasizing that their improper sexist symbolic association was contributing to the overall steady economic decline of women across the globe.

In the midst of handing out these pamphlets of protest, an actual victim of exploitation approached the renowned performance artist asking what the commotion was about.

In other words, a Playboy Bunny who was about to begin her shift came up to Ms. Anderson and inquired about what was going on.

Laurie handed the Bunny one of her Bunny-designed pamphlets and began explaining the protest group’s purpose for being there, when the cocktail waitress interrupted her saying,

“Listen….Honey….I make $800 a week at this job. I’ve got 3 kids to support. This is the best job I’ve ever had. So if you want to talk about Women and Money, why don’t you go down to the Garment District where women make 10 cents an hour, and why don’t you go and march around down there?”

To which the brilliant but admittedly befuddled Laurie Anderson replied, “Hmmmmmm.”

There are choice times in Life when each of us forms very defined opinions and judgments which we never question, as well as presume that not just does the vast majority hold this same non wishy-washy opinion, but  assumes one’s viewpoint is Universally accepted by all.

What does one do, then, when these believed to be Universally held opinions that are defined/cut & dry/black & white/Us versus Them/ (you get the mentally static picture), are observed by others to be contradictory to yours? Not only that, but when one discovers that a vast number of people hold as diametrically different as possible a perspective as your own, and just as strongly?

Like Laurie Anderson, I was frozen in a mid-mental grapple and only able to utter a befuddled “Hmmmmm.” immediately following a shocked moment of mental enlightenment I experienced in the autumn of 2011.

It was in mid-October of that year when I went to my friend’s place for dinner and the topic of “Gaddafi” was brought up over post meal coffee.

This was not the first subject of conversation directly following our meal. My fellow Air sgned friend couldn’t wait to power babble away after the dishes were done to tell me all about her latest romantic conquest, a handsome man she had met over the internet who hailed from the African nation of Benin. Some may be more familiar with this African coastal country by its former French colonial name, Dahomey.

Benin is located along the central west coast of Africa. It is bordered to the northeast by Niger, which in turn, is bordered to their northeast by the North African country situated along the Mediterranean Ocean which you may have heard of – Libya, the nation formerly ruled by the autocratic ruler, Muammar Muhammad Abu Minyar al-Gaddafi, better known to the world unofficially as Gaddafi.

Despite my sound knowledge of world geography, I erroneously presumed I possessed sufficient knowledge regarding the Libyan leader.  The same Libyan leader whose life ended on the day I was to realize that I was, in actuality, truly clueless about the subject in question due to being deceptively fed information that was never questioned and always ingested in its entirety.

Upon hearing all the “super cute” and “he’s not like the other guys I’ve dated” comments, I asked my romance starved friend exactly when she and the boy from Benin had physically met.

“We haven’t yet.” she sheepishly answered. Knowing how derisive my reaction would scathingly be upon hearing yet another repeat of her cycular dating pattern, my friend fetched her laptop with lightning speed and opened Facebook before me.

Instead of noticing the cyber space couple’s trail of messages which had spiked in both intimacy and naughty talk in a minimal amount of time, my attentions bee-lined to the African cyber soul mate’s Facebook Wall.

My eye was immediately drawn to a sea sized stream of postings, all containing the word “Gaddafi” but instead of exclamations of joy or relief over the Libyan leader’s death, posting after posting proclaimed immense grief, intense pride, and demands for Justice over the hunted ruler’s assassination. Even more flabbergasting were the superlative phrases of solidarity and respect many people posted, such as “Our Brother Muammar” and “King of Kings“.

How could this be?

You mean to tell me that the entire population of the planet didn’t unilaterally despise Libya’s tyrannical dictator and weren’t across the board smugly satisfied  the despot accused of such inhuman acts as mass murdering his own people along with ethnic genocide didn’t at bare minimum rightfully get what he deserved?

Let us leave a very slack-jawed and thoroughly confused Brad for now.

In Part II of “Muammar The Mutable“, Brad should be mentally alert enough to examine the highly skewed information he’d been given over the years by the American media concerning the persona and deeds of “the world’s most dangerous man”, who was pervasively perceived by many Westerners to be 2nd in Anti-Christ-ness only to Hitler. The currently stunned to silence astrologer will also compare and contrast the media’s version of their projected construction of Gaddafi against the astrological Gaddafi, as evidenced by the Libyan leader’s birth chart along with the planetary transits which occurred on the date of his death, October 20th, 2011.

*Brad Kronen’s book “Love in the Stars: Gemini Edition” is available for purchase at your local book seller or online at amazon.com at the link listed below: