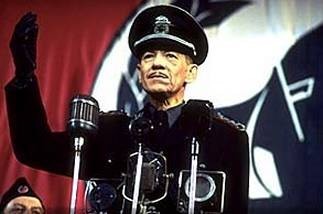 You, Sir, are worse than Hitler….at least according to Shakespeare and film renditions of his play, such as this 1995 Nazified version with Ian McKellen as Richard III. (britannica.com)

Part the Second – My Kingdom For A Car Park?

Alongside Macbeth and Titus Andronicus, Richard III stands to be one of William Shakespeare‘s most onerously evil of literary rulers.

But as more and more factual evidence unfolds, the Bard of Avon’s play about the last ruling son of York is showing itself to be a well-crafted tool of political propaganda and anything but a realistic depiction of the monarch with the shortest reign in British history.

Even among the aforementioned lead roles of self-entitled Shakespearean darkness, Richard stands out. Titus Andronicus becomes hell bent for blood out of sheer revenge due to losing his entire family all at once. Macbeth has a partner who inspires him to do his dirty work, and even then, becomes weighed down by a conscience made unbearably heavy with guilt.

Needing neither revenge nor encouragement, Shakespeare’s Richard III seems to get a downright kick from killing. His wanton joy for murder is made all the more despicable given the way Shakespeare’s words physically mold the ruthless ruler to life, as a deformed hunchback who slithers about hiding his congenitally withered arm as well as his deadly intentions.

But as history has shown us time and again, every myth, stereotype, and effective piece of political propaganda has a kernel of truth regarding its core subject matter, regardless of how exaggerated or cartoon-like the finished end result becomes.

Which brings us back again to our unfolding drama of recent archaeological discovery and intuitive intrigue….

As stated in Part I, the whereabouts of the real remains of Richard III are covered in both uncertainty and mystery, given some say the monarch’s slain-in-battle body was thrown into the Soar River, and others say the vanquished King’s corpse was buried in a friary which is known to no longer exist.

As also previously mentioned in Part I, whilst in the process of doing research for her screenplay about the “real Richard”, Philippa Langley went to the supposed locality of where it was said the remains of Richard III were laid to rest.

Keeping in mind the earth bound side of the recounting of Richard’s remains tell of a monastery which was destroyed only a century following the monarch’s death, Philippa had barely any tangible evidence from which to go by.

Upon her arrival in Leicester, Ms. Langley was directed to a parking lot after being told the car park marked the site where the Grey Friars monastery was said to have once stood at the time of Richard III’s death in the late 15th century.

“I walked that car park and I just knew there was nothing there. It was ‘dead’.” the Scottish secretary of the Richard III Society informs us.

Enter alongside our leading lady, the co-star of our story, human intuition.

Ms. Langley goes on to say, “As I walked away, I saw another, private car park over to the right. I know how mad this sounds, but I snuck under the barrier and, on a very particular spot, I had the strongest sensation that I was walking on Richard’s grave. On a subsequent visit, I found a little white ‘R’ painted on the exact same spot. Of course it was ‘R’ for ‘reserved’, not ‘R’ for Richard but from that moment on, I was on a mission.”

Bravely foraging through dragon-sized mountains of red tape and skepticism over time Philippa Langley was commissioned a dig by Leicester’s Archaeological Services and was given permission to do so by the Leicester City Council.

527 years and 3 days after the monarch known as Richard III had left this plane of existence, the ground of a private car park in modern day Leicester was officially broken to search for the vilified king’s supposed remains. In all historical likelihood, the date on which the excavations began, August 25th, could very well be the exact same day in history when Richard’s remains were actually buried, given the time needed for his body to be retrieved from Bosworth Field following his death on August 22nd, in the year of our Lord, 1485.

In Part III of our history revising tale, both Forensic Science and Karmic Astrology take the stage to confirm the reality of King Richard’s remains.

*Brad Kronen’s book “Love in the Stars” published by Llewellyn Worldwide, Inc.  is available for purchase at your local book seller or online at amazon.com at the link listed below.

Brad Kronen’s guide on Astrology and Relationships “Love in the Stars” for purchase on amazon.com