The mystical monk who “spoke to the Animals” – St.Francis of Assisi

That’s the name I chose for my Confirmation. In the Catholic faith, the ritual of a child’s rite of passage into young adulthood is enacted through the sacrament of Confirmation. How a young Catholic adolescent states to the world that he is no longer a child is by adding another name to his pre-existing ones that is chosen by him alone and not his parents. This rite of passage name should be associated with a particular Saint whom the young adult admires and hopes to emulate by mirroring their behavior and world outlook. For me, there could be no other choice but Francis. By choosing that as my confirmation name, I hoped my life would reflect the actions of the saint who “spoke to the animals”, St. Francis of Assisi.

For as long as I could remember I intrinsically sensed the Animal Kingdom held far more cosmic significance than merely to provide meat or milk for Man’s nourishment or fur to keep us vulnerable humans warm. Those needs are just as valid today as they were at the dawn of civilization. However it is by looking at the pets we have known and loved throughout our lives that I am able to see how animals are an integral part of the cosmic fabric that binds us to our paths of spiritual evolution.

Astrologically, it’s assumed that as all of us journey through time, we will (or at least should) have a pet at some point since they are an aspect of life which lay beneath the house ruled by the sign of Virgo, otherwise known as the 6th House of Daily Service, Health, and Domestic Pets. (Major astrological gem of a secret: I take my pets to Virgo Veterinarians, ONLY)

By being an aspect contained within the astrological system of houses, pets bear far more cosmic significance in our day to day worlds than just keeping us company, which for many can be a life saving thing unto itself. With the sixth house also overseeing the concepts of work, repetition, and health, it’s as if the Universe strongly hints having a pet by our side as we work through our daily tasks will not only provide us with a sense of overall well-being, cosmicly our special animal friends are the final component needed in order to live a truly healthy life.

But the cosmic role our pets play for us extends far beyond our need for their presence in our daily lives.  I have come up with a phrase that I often will state in front of many a mutual pet owner – “You do not choose your pet, your pet chooses you.”

These special animals that we love like our own flesh and blood have a knack for entering our lives at the most crucial of times and exactly when our souls will benefit from their existence the most.

Their purpose for making their presence known in our lives are many and multi-fold, from significantly contributing to their owner’s spiritual evolution by acting as guardians against negative or dangerous forces that can be seen as well as unseen to teaching us responsibility, pride, and unconditional love by caring for them.

For many, their pets also serve a most vital cosmic purpose as beacons of hope by showing us there is something to live for beyond just ourselves.

The cosmic importance pets play in our lives was made clear to me, oddly enough, on the eve before one the darkest days of Man’s recent history. On the night of September 10th, 2001 I was watching “The Larry King Show” because his guest that night was the acclaimed intuitive, John Edward.

During those final quiet moments before Hell was unleashed, I lived in the lower East Village of Manhattan, near the World Trade Center. For those who are unfamiliar with Mr. Edward’s gifts of communing with the dead, when placed in a studio setting, he will choose the most pertinent messages from those who have passed on which need to be relayed to certain viewers by many times interrupting whichever caller is on the air saying something akin to: “My apologies Sir/M’aam, You need to hang up now because I’m getting an important message for someone who is 3 calls after you.”

This particular night was no exception and I clearly remember Mr. Edward saying: “Sir, I’m sorry but what I am picking up is for the caller after you.”  When the next caller came on the air, Mr. Edward’s face became pinched as she began to speak, causing the great intuitive to interrupt her saying “M’aam, I’m sorry I really cannot hear you since there is a dog with a man’s presence and it has a particular type of barking that is really getting in the way.”  The caller then loudly squealed, exclaiming her father and his dog were inseparable and that the dog had passed the day after her father had died.

I sat there stupefied. I was being shown that the bond a man has with his pet can exist in this life AND the next.

Despite today being one of my favorite holidays, I awoke this morning to be told two dear friends had lost their pets – Dane, a striking all black cat with glimmering emerald eyes and Priscilla, a rescued bearded dragon lizard who was the best alternative to hypertension just by holding her.

These glorious animals that bring us such happiness dualistically can cause our hearts to practically burst with sadness when they exit from this world. I now realize it’s just and proper to feel such raw grief when these cosmic creatures leave us, for our pets are divine gifts that guide our souls towards their final destination and they in turn wait for us there in joyful anticipation. 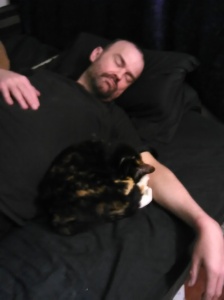 Brad Kronen’s book “Love in the Stars” published by Llewellyn Worldwide, Inc.  is available for purchase at your local book seller or online at amazon.com at the link listed below.

Brad Kronen’s guide on Astrology and Relationships “Love in the Stars” for purchase on amazon.com

One thought on “The Cosmic Purpose of Pets”