A Mercurial Match
Made in Heaven and Hell 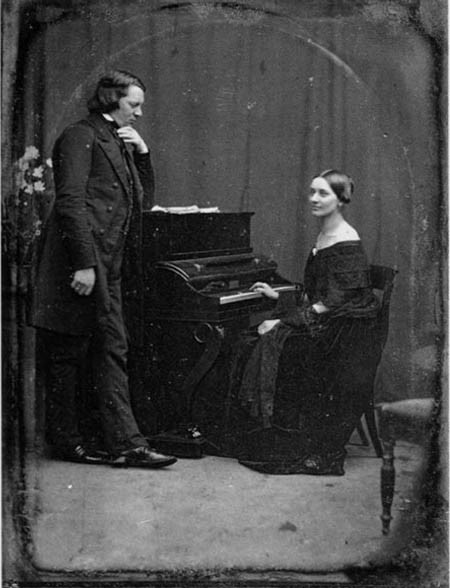 A Daguerrotype photo taken of the Schumanns circa 1850

The most notoriously romantic couple which emerged from the world of Music during that most artistically inspired of Ages known as the Romantic Era were Robert and Clara Schumann.

Both were musical geniuses in their own right.

Both were considered to be the greatest in each of their respective art forms.

Both were born with the planet of communication as their astrological ruler and hence were both Mercurial to their core.

He, the Gemini, born June 8th, 1810 was a composer and considered to be one of the vanguards of the Romantic Movement of Classical Music with his compositions of musical daring originality. Today, Robert Schumann has been elevated to the Pantheon of the greatest composers of all time, alongside Bach, Beethoven, and Mozart.

She, the Virgo, born September 13th, 1819 was a concert pianist and during her time was considered to be one of the world’s best interpreters of the works of Bach and Beethoven, along with promoting and performing the compositions created by her husband, the majority of which were written for her. Today, Clara Schumann has been elevated to the highest level of performing artist, since not only is she considered to be one of the greatest virtuosos of the piano of all time, but the instrumental concert as we know it was structurally of her Mercurial making. Clara’s detail driven, Virgoan mind set the artistic standard for all virtuoso concert performance by having any/all music played before the public being fully committed to memory.

Although their union is praised to this day as one of the best examples of romantic artistry that not even Literature’s Robert and Elizabeth Browning could surpass, the marriage between these Music Masters is thoroughly steeped in that most Mercurial of mentally perceived forces – Duality.

The marital misconceptions regarding their relationship is not surprising, considering both Mercurial members of this artistically gifted duo dualistically chose as opposite an approach to both their marriage and Life at large.

His soared further and further to the heights of idealistic fantasy.
Hers rooted itself deeper and deeper in the pragmatic grounds of reality.

From an idealistically archetypal perspective, the Schumanns have been placed on the highest pedestal of marital perfection by both Romantic music lover and lover of Romance alike.  Artistically, this can be easily understood by virtue of one being the other’s Muse of artistic, and just as importantly for the Mercury ruled, mental inspiration.

However, the Schumanns themselves contributed to creating the idealistic mist of romantic veneration extra opaque by their own making. From the day after their honeymoon through the first four years of their marriage, the couple rigorously kept a “marriage journal”, where each divulged their most “intimate thoughts” and “genuinely held feelings” on consecutive weekly entries.

The journal was Robert’s idea and your author feels this diary of artificial True Love is one of the best pieces of evidence regarding Schumann’s inability to cope with both his, and more importantly, HER artistic genius, by virtue of its almost silly sense of unreality.

With such goopy entries full of saccharine Romanticism as the example below Robert wrote of his wife, even the most die hard romantic would have their eyes rolling (although as a Virgo, Clara must have dualistically shed tears of both Joy and Terror upon seeing the “P” word used) :

“She is a gift from heaven…. Think of perfection, and I will agree to it.”
Even critiques made by authoritative musicologists about the Schumann Diary broke from their pedagogical standard by being statements which were purely subjective but still accepted as undisputed fact, such as the following quote from Schumann expert,  John N. Burk, which states their marriage diary marks the period of time where “Robert and Clara blissfully entered the serene haven of married life.”

We now know that this was far and away simply not the case.

Mercurial to the core, upon being married, Robert Schumann’s behavior began to reveal that most Mercury influenced of mental afflictions with its dualistic display of opposing extremes, bi-polar manic depression.

Schumann first exhibited signs of the mental disorder in his early 20’s and by his early 40’s the composer attempted to end his life by throwing himself into the Rhine River at the height of winter.  The man who is so artistically revered today was forcibly committed to the local mental asylum in Dusseldorf upon being rescued from the icy water.  Horrifyingly, the music great’s mental disintegration took place amidst the jeers from the local townspeople who watched the composer’s mental collapse from the sidelines of a carnival which was taking place along the river at the time of his demise.

Robert Schumann never returned from that asylum and was very unceremoniously found dead there 2 years later, at the age of 46.

Where Robert’s Mercurial nature broke further and further away from reality, Clara’s Mercurial sense of practicality became firmly entrenched in it. At the time of her husband’s death Clara Schumann was 37 years old and left alone to care for the couple’s eight children.  Despite her prospects looking chaotically challenging at best, true to her Virgoan essence Clara came up with a solution that not only assured her and her children’s survival, she thrived both as an artist and performer by re-emerging on the virtuoso circuit tour as she first did as a child prodigy at the age of 8.

Clara Schumann would go on to outlive her husband by four decades and her career as a concert pianist where she performed before one sold out concert hall after the other would straddle six.

Although there are opposing misconceptions associated with the marriage of this most Mercurial of couples, the lives of Robert and Clara Schumann are resolved to full cosmic completion through their legacies of artistic genius which shall stand firm until the end of Time.

In 1989, Clara Schumann’s artistry was commemorated by the German government with her image being imprinted on the 100 Deutsche Mark note.  The Virgo’s musical virtuosity was highlighted by the use of the lyre image above the “100” deferring to the man from ancient myth who played the lyre like a god with a near perfect sense of detailed precision, Orpheus.