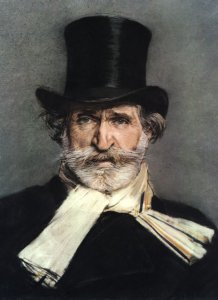 That’s how I first became familiar with the great composer, Giuseppe Verdi. I was in 2nd grade and my father was taking me on  my first stroll through that vast, expansive world that is Classical Music. Knowing at the age of 8 I wasn’t quite ready to fully absorb or pronounce anything remotely resembling Italian, my father would animatedly say to me, “Giuseppe Verdi is another way of saying Joe Green.” He then proceeded to play me that popular Verdi hit used to sell anything from life insurance to car wax,  The Anvil Chorus from “Il Trovatore” from Dad’s “Voice of Firestone” record collection. After becoming familiar with the tune, whenever the chorus of renegade gypsies broke into song in synch with their metallic hammers, my father would turn to me and say “Who wrote it?”

Joe Green. He wrote that and a whole lot more.

2013 marked the 200th Anniversary of the birth of the man who has become one of my all time favorite composers.  A composer whose name I now can pronounce correctly and whose art I was also lucky enough to perform – Giuseppe Verdi.

The man considered by many to be “The Father of Italian Opera” was born on October the 9th or 10th, (historians are still unsure of the exact day due to the composer’s birth certificate stating the date of birth as “born yesterday”), 1813 in the small town of Busseto, in the northern province of Parma, Italy.

Giuseppe Verdi has been an integral force of artistic inspiration throughout the course of my life, starting as already mentioned, when he was just Joe Green to becoming an appreciator and rabid fan of his works, to evolving into an actual interpreter of those works when I performed them with full operatic casts and orchestra ensembles as a professional opera singer.

I will be posting seven (one for each decade of the Maestro’s composing career) selections from Verdi’s vast lexicon of musical compositions that touch upon the various phases associated with  the composer’s long lived life. Some pieces, everyone should be relatively familiar with. Some, everyone is familiar with but probably don’t realize “Il Maestro” wrote the music. And finally, some which I have directly experienced through performances that also tell a great story, too.

So practice on dropping those diaphragms good and deep, folks, and start taking in your best singer’s breath! 207 candles take a lot of wind power to blow out.

*Brad Kronen has written an astrological dating guide for each  of the 12 signs of the Zodiac.  Below is a link for the sign of Partnership, the same sign “Il Maestro” was born beneath – Libra which is available on amazon.com: