For those who weren’t aware, the renowned astrologer whose written words each of you have not been able to devour fast enough is also a devotee of yet another subject that is more traditional but which Brad Kronen has a driving passion for just the same – History.  And like every devout historian, Brad has an area of history which could be called his “niche” or “specialty”, that being the 20th century’s two World Wars.

In order for his readers to adjust to writing that’s created from a purely historical perspective, Brad thought it best to take a single topic and to write about that one subject from both a historical but also from his typical astrological perspective which truth to be told is anything but.  With Kronen having the sign of Royalty as his Ascendant along with the “King” of Planets positioned in his First House in that same sign that’s symbolized by the “King” of the Jungle of Leo the Lion, it would naturally follow for the topic of Brad’s written choice to be Britain’s Royal Family otherwise known as the House of Windsor.

The write up for Kronen’s first history book is as follows:

“Most Americans and Brits in the 21st century aren’t aware just how grim the situation was for the Allied Forces during World War II’s earliest moments. Nearly all was already lost. Well before the United States entered the conflict, only one country solitarily stood against the tyranny and military might of Nazi Germany – Great Britain.

In those early days of the War Adolf Hitler saw how vulnerable England was as Germany’s single source of resistance. Intending to bring the British to their knees through surrender the Nazis hammered the British Isles with all its military might through a barrage of nightly air raids over England for eight solid months better known as “The Blitz”.

In his book “For King and Country: The Wartime Windsors” Brad Kronen takes a detailed look at a crucial moment in History when global democracy was perilously threatened most. As we all know, the Allies eventually won the war but Kronen emphasizes that England’s transformation from the bombarded underdog at the start of the War to the triumphant victor at the conflict’s end is nothing short of miraculous.

He believes one of the biggest contributors to Britain’s transformation is the role undertaken by its Royal Family from the House of Windsor.Using easy to follow language with a dramatic storytelling style, Brad Kronen takes a fascinating perspective of the Second World War that can be thoroughly enjoyed by both history buff and history novice alike.

If you’re a fan of the series “The Crown” or loved the film “The King’s Speech”, Brad Kronen’s book “For King and Country: The Wartime Windsors” is a must read.” 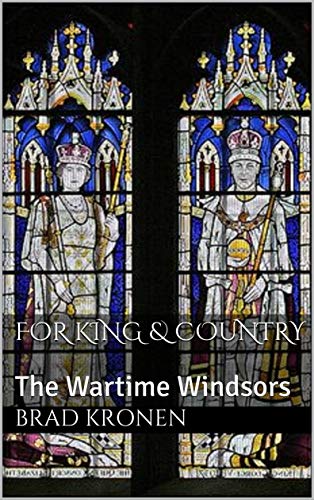 And the Astrological/Esoteric side to that Royal Crown, Brad Kronen presents his book  “Five Generations of Unrectified Royal Karma: The House of Windsor 1894 – 2013“.

The write up for Kronen’s astrological book about Britain’s Royal Family is as follows:

“What began as an act of defiance against royal protocol ended up becoming the starting link of a chain of unresolved familial karma that would continue to grow in strength over the course of five generations within Britain’s Royal Family, otherwise known as The House of Windsor.

Brad Kronen’s book “Five Generations of Unrectified Royal Karma, The House of Windsor 1894 – 2013” is a testament to the esoteric theory that Karma runs through Families by discussing the familial karma of one of the most prominent families in all of Modern History – Britain’s House of Windsor.

Starting with the birth of King Edward VIII in 1894 along with his subsequent abdication of England’s throne and ending with the birth of the first of the British royals born in the 21st century, Prince George in 2013, Kronen covers the nearly 120 years where each subsequent generation within the House of Windsor forged a new link that in turn strengthened the Royal Family’s ever growing chain of unresolved karma. Kronen sheds an entirely different light on key members of Britain’s Royal Family who are also the most karmicly significant within the House of Windsor including Princess Diana, her son Prince William, along with the English monarch with the longest reign in British history, Her Royal Highness Queen Elizabeth II.

Not only is Brad Kronen’s book about the House of Windsor’s Royal Familial Karma esoterically unique, it’s a literary work about England’s Royal Family that is entirely new and wholly unto itself.”

For fans of “The Crown“, Brad’s book “For King & Country” can be seen as the precursor to that series and his book “Five Generations of Unrectified Royal Karma” can be seen as that show’s precursor, contemporary reading material, as well as the follow up Epilogue to that wildly popular series about Great Britain’s Royals.

Celebrate with Brad Kronen the writing of his first History undertaking!  And of course,
“GOD SAVE THE QUEEN AND THE HOUSE OF WINDSOR”